Economic growth in Indonesia which is relatively stable in recent years plays a role in the development of the commercial business sector. It is followed by increasing demand of commercial space.The capital of East Java, Surabaya, is predicted to experience a property boom in 2017 based on the condition of demand, supply, and prices that continue to climb up. Commercial projects that are expected to be completed in 2015 itself was dominated by the hotel sector. Rivalry in the hotel business is going to be tougher and more competitive. Vasa Hotel is a five-star hotel. Vasa Hotel will be operated in mid 2015 and is located in a strategic location for commercial business, specifically at Jalan HR. Muhammad 209.It has branding as a luxury hotel. Lobby area plays an important role.Lobby gives an overall picture of the hotel and staff service performanceto visitors. In the interior design of the lobby area, the author applied the concept of vivacious and spacious. The concept application can be seen fromthe circulation setting andinterior elements that formed a dynamic as well as clear distinguishment of each area. Public spacesare open or have minimal wall to accommodate various types and activities of visitor, giving the impression of a spacious and luxurious lobby. 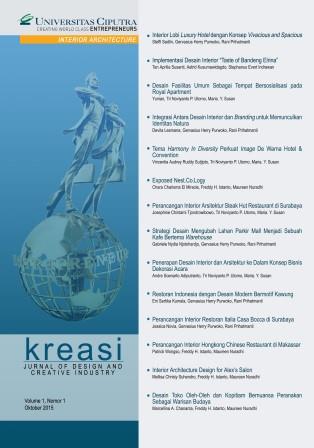